The good thing about cycling across a desert is that you can make a nice hot batch of tea without even getting your stove out. All you have to do is put tea bags in one of the many extra bottles of water you’ve strapped to your bike and let the inescapable heat do the rest. That is about the only positive there is to it. There are, however, far more negatives.

With the endless Russian Steppe to the north, ISIS to the south, and Iran not currently granting visas to British independent travellers, the road ahead was not one of choice. My only way to cycle into Central Asia was to take the boat across the Caspian Sea and then cross the northern edges of the Karakum Desert in Kazakhstan before heading back south into Uzbekistan and its epic medieval Silk Road cities. Khiva, Bukhara, and Samarkand beckoned but beforehand lay quite a challenge because the road across this sparsely populated part of the world had a reputation. It had previously been dubbed the “worst road in the world” due to endless desolate landscape, few sources of water, relentless heat, and a terrible surface (basically a dirt track). When I set off from Aktau, this “road” ominously lay out before me and I felt genuinely worried about the 5 days it would take me to get to oasis town (relatively speaking) of Beyneu. 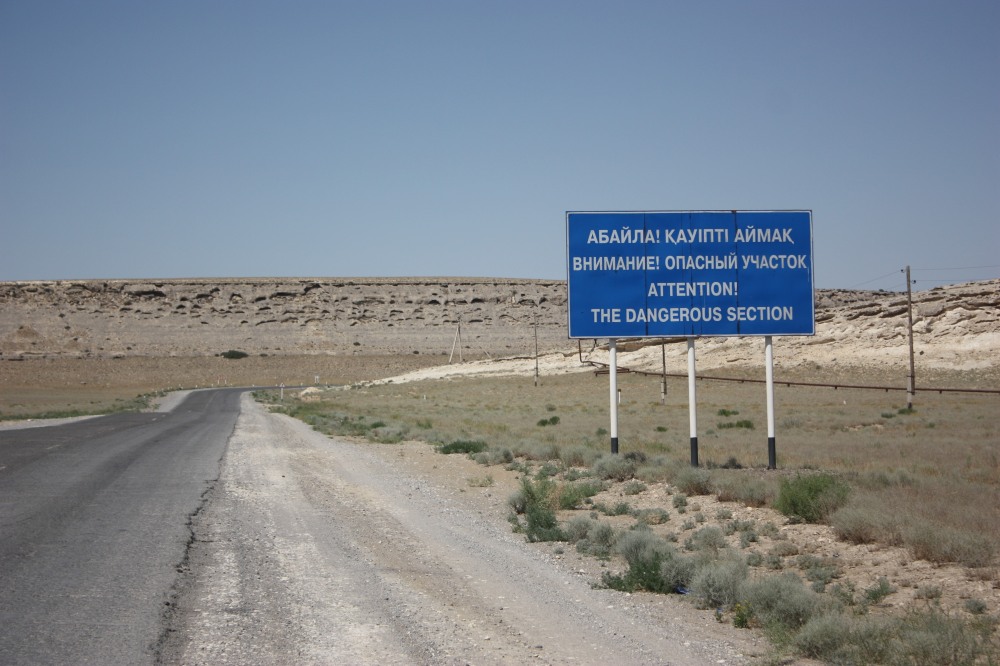 I was going to use this post to stress what an adventure it was. To be sure, it was: I’ve never seen experienced such splendid isolation, nor so many stars in the night sky. The way the desert looked in the early mornings was awe inspiring and the generosity of passing drivers, who regularly passed water and food (and vodka) through the windows from their air conditioned cars, was life-affirming.

The relentless march of progress has reached this remote corner of Kazakhstan, too. The dirt tracks are slowing being resurfaced with silky smooth asphalt, taming the sense of adventure that came with the bumpy, quiet roads that lured many masochistic long distance cycle tourists. About 3/5 of the road surface was unpleasant and 2/5 of better road was just boring, given that you couldn’t be entertained by avoiding the piles of sand that consumes half your wheel, brings you to a halt, and usually topples you off your bike.

The heat was unpleasant but its main worst feature of it wasn’t physical. You have no choice but to somehow get out of the worst of the 45 degree heat and that ruled out cycling between 12 and 5pm. As such, cycling across the desert involved as much time waiting as it did on the saddle. Trying to take an afternoon nap in a drainage ditch wasn’t the adventure I was looking for; it was just boring. If you’re lucky enough to find a chaihana around midday, you can then at least down litres of ice cold coke or ice tea (or both) and then nurse your water baby for a couple of hours as you lounge around on the elevated platforms with a bunch of hungover or drunk (or both) truck drivers.

The landscape was also boring. Except for a stunning bit of scenery 100km from Shetpe, the rest of the flat, dusty, dry landscape offered little outstanding natural beauty to help pass the time or make it feel like this part of the world was worth riding through. For the final two days, the only thing that broke the backdrop of endless, horizontal steppe was a set of telegraph poles. Think of it as a shit desktop background. It looked nice against the rising sun, though.

And finally there was the wind, which was as boring as the other things I have ranted about. The exhausting headwinds slowed me down to almost walking pace and forced me to spend longer amount of time amongst the boring, desolate part of the world, looking at boring scenery and riding on a boring road. Occasionally you get a little bit of fun with a side wind and can pass the time by concentrating on remaining upright and in a straight line without veering into a passing truck.

So on arrival in Beynu I really struggled to feel a sense of achievement for cycling all the way. It was boring and I fear that when the new road is completed (apparently next year, one engineer told me) it will be even more boring.

So here’s some advice to anyone thinking of coming this way: Get the train. Cycle a day or two of it so you can enjoy a sunrise and a shot of two of inapproately-timed vodka. Then hitch a ride. Spend your time and money (it’s expensive here!) in better parts of the world.

After reuniting with some other cyclists I met in Baku and with 300km of the same, straight, flat, hot, asphalt ahead of us, we decided to do just that use the time gained to explore what’s left of the Aral Sea instead.

4 thoughts on “Cycling the Kazakh Desert: This isn’t the adventure you are looking for”