As always, the immediate relief brought by the smooth asphalt of the Stuart Highway faded away, this time to be replaced by rose-tinted nostalgia for my time in the Tanami desert. Before the Tanami, it was nostalgia for the Buntine Highway and before that fond set of cherrypicked memories, I’d daydream of all those dirt road that took me across Central Asia whenever I was bored of smooth roads and longed for something more like and ‘adventure’. This selective amnesia allows you to forget the discomfort, the frustration of riding an arse-numbing, spoke-breaking, so-called ‘road’ and you think of those moments along the way that made it all worthwhile.

Then you decide to do it all over again.

Introducing the Oodnadatta track: Another dirt road connecting tiny outback settlements that have their population written on the welcome sign, a number that rarely extends beyond three figures. Between these tiny enclaves, alongside the road, are the slowly rotting sleepers, rusting water towers, and crumbling workers huts of the old Ghan railway. This track’s empty roads and isolated camp opportunities were dusted with a sense of eerie history of a forgotten artery into the unforgiving centre of Australia, an artery that went wherever there was water and brought with it life.

This time I wasn’t alone and was joined by Kendon, an Aussie cyclist who had done a world bike tour when the likes of Al Humphreys was doing his own and who’s subsequent book was a huge source of inspiration for my own trip. After a dust storm had finished battering our tents in the barren campsite we had checked into at Coober Pedy – a town surrounded by open mine shafts dug by hopeful opal miners – we stocked up our bikes, enjoyed our last visit to a bakery, and hit the road to link up with the Oodnadatta Track at William Creek. I had spent a long time on my own in Australia and the concept of being able to have a conversation all the time was difficult to get used to at first, taking quite a lot of my concentration and energy to focus on while riding. Luckily, Kendon’s back had given out the day we left and, in order to distract him from the pain, he was more than willing to do most of the talking.

“Story Time?” He’d suggest, usually when his face was showing particular signs of discomfort on a particularly badly corrugated part of the road, and then he’d spin a tangent filled yarn about his own world trip, some particularly insightful observations and explanations of the Australian psyche, along with a rendition of Waltzing Matilda, which I think might have been due to the Tramadol pills I’d given him for the back pain. 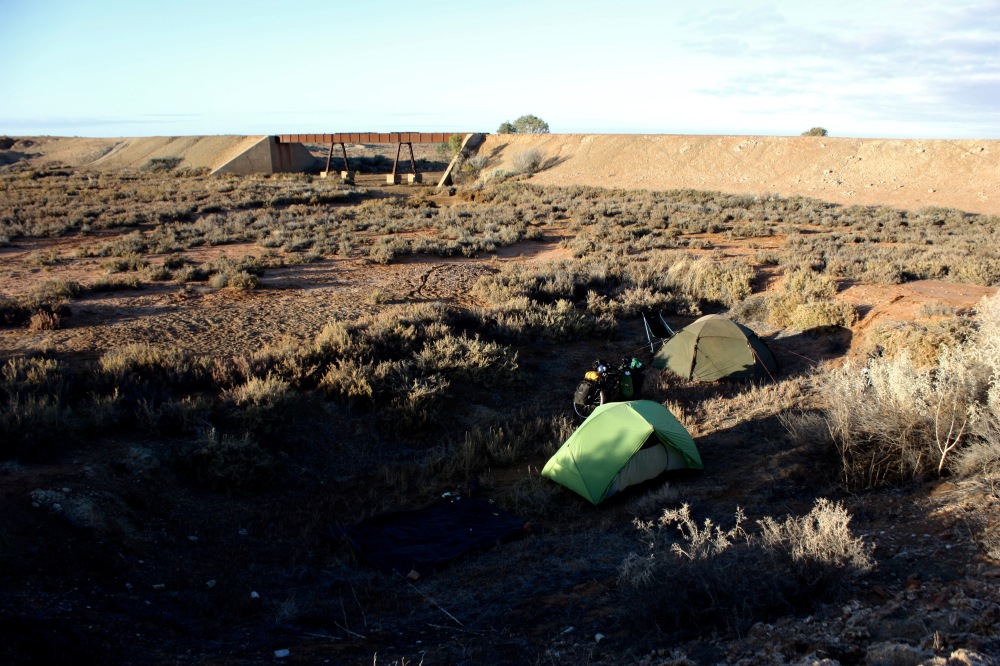 Though the first few days we always bumped into Bob and the Queenslanders, who were driving the Oodnadatta. Every time we crossed paths, they had consistently been our trail angels and had allowed to refill our water bottles in William Creek, had given Kendon a lift to Coward Springs campground (sparing him from a particularly back breaking bit of corrugated road) and who then shared an amazing dinner of real food at Coward Springs Camp: a bloody fantastic stew cooked on the fire in a heavy cast iron pot that was a pretty good introduction to the Aussie camp oven. That was certainly a relief to instant mashed potato, that had become my staple meal thanks to its calorie to weight ratio. That’s stew is definitely one of the things I first think of when I think of the Oodnadatta track; certainly before I remember the bull dust and corrugations.

We followed the old railway lines and abandoned, crumbling huts, cottages and warehouses that lined the track and eventually arrived at Curdmurka Siding. Here, railway workers would be stationed so they could fix any of the often occurring problems with the track quickly then having to send someone out from one of the towns. A solitary row of huts stood in the middle of a desert, along a line of brittle steel rail that’s regular breakages were the reason the cottages’ inhabitants had to live in such an isolated place. The cottages were intact and there was a working, unblocked fireplace in one of them and a lot of wood around. It was only mid afternoon when we arrived, and we still could have churned out a few more hours of riding and camped in some creek bed like every other night, but every so often you find a potential campsite that’s so perfect that it would be a sin to carry on just for the sake of a higher number of Kilometres on your bike’s computer.

It was one of those times when you suggest something and see whether the other person things you’re joking or making a serious suggestion. Luckily Kendon instantly agreed that we should make a pre-emptive stop for the day. We gathered up the wood, set up our tents and went inside to light a fire and cook dinner out of the wind and in the warmth, and wondered who had lived in this hut before. I went outside to check out the setting sun and rising full moon both sharing the sky for a fleeing moment and noticed that there were no hills or trees from where I stood and that this 360 degree, perfectly flat horizon really drummed home what an isolated existence it would have been to live in one of those huts we felt lucky to be using as shelter for the evening. What kind of person took up a job like this? What kind of life had he made here? And what went on in the room we were cooking our sachets of instant carbonara in? It was probably one of the first times in Australia I had felt near anything with that’s most powerful impact was the sense of history. Abandoned by the present, these old ruins were something that are truly possessed by the past alone, creating a direct link to that time of their heyday in a way that something that has been upgraded and renovated in order to have a use today fails to do. 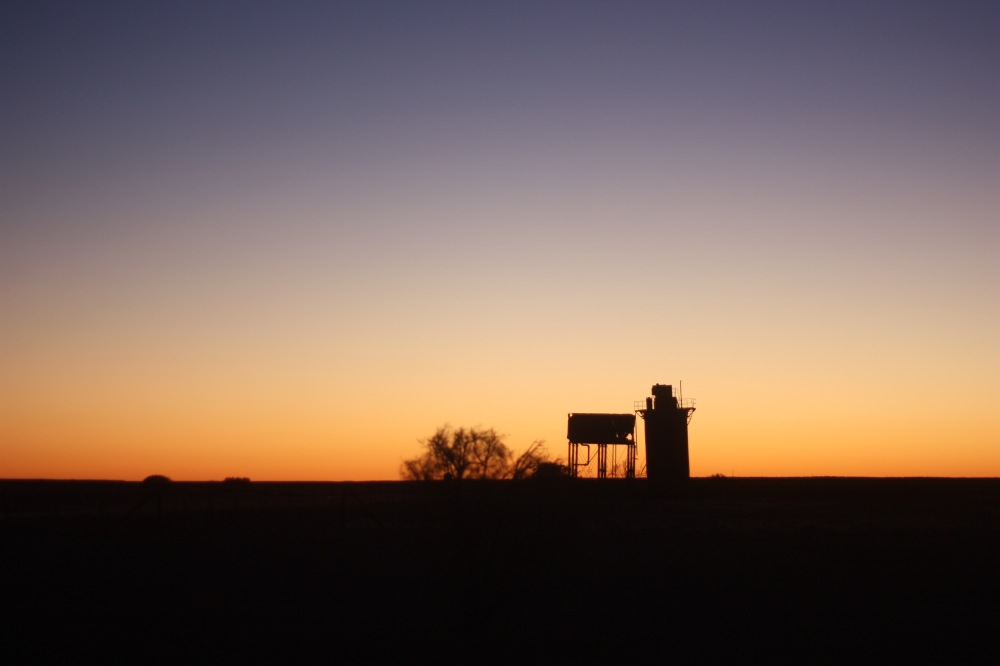 That night was another memory I’m certain would be cherrypicked by hindsight, much more than the next few days of pretty uninspiring land, past Lake Eyre – Australia’s lowest point at 8 meters below sea level – and onwards towards Marla. After several more days of the usual routine, we reached the end of the dirt road and almost simultaneously I reached the 25,000. Yay.  Soon afterwards the Flinders mountains came into view and unfortunately, so did the worst headwind of this country so far. By this point, after god knows how many weeks of riding through open outback and more often than not into the blowing gales of the prevailing southeasterly breezes, I was well and truly done with the wind. It’s something that you can’t see in any of my photos but if you imagine blowing a fan into your face at all times between sunrise and sunset, that’s what it felt like. Wind is by far the worst weather when you’re on a bike all day and sleeping in a tent at night. Wind steals from you energy and any gear or food that isn’t heavy or pegged to the ground. Wind breaks tents, robs you of sleep, ruins days by turing what should be a leisurely half day’s ride into a day-long struggle, and can turn an effortless downhill glide into a first gear struggle. 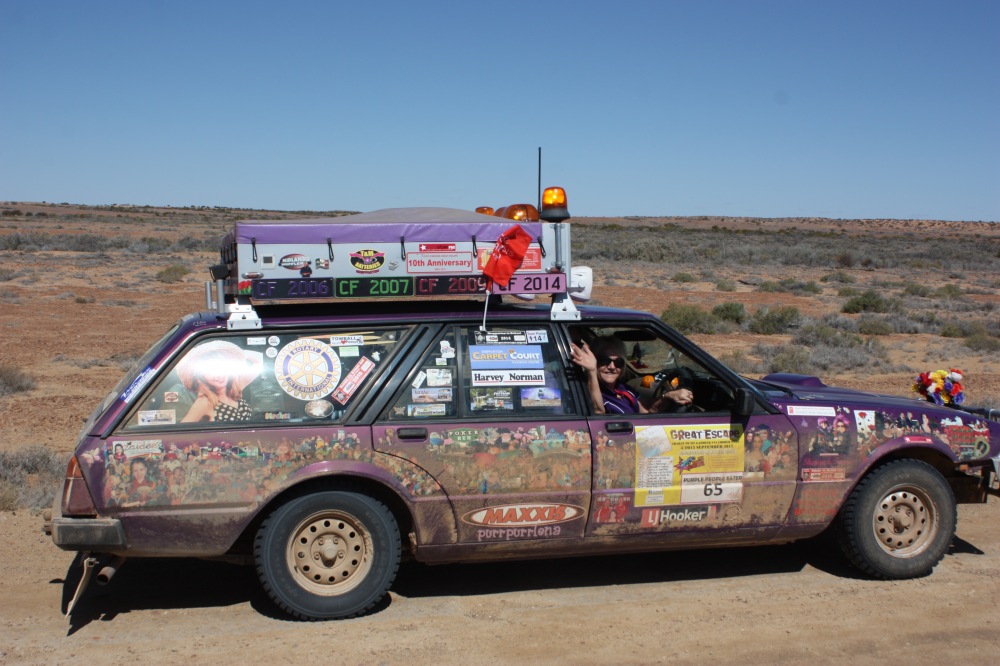 But this is Australia, and if I’ve learnt anything it’s that I shouldn’t whine (I swear calling someone a whiner is more offensive than using the C-word here). Luckily with the selective amnesia of highlight, those things are certainly not going to be the first thing that pops into my head in the days and weeks of asphalt riding that are ahead of me. I’ll certainly think of the fire at the railway siding before I think of that day of headwind at the flinders; I’ll think of the Queenslanders’ camp oven before I think of ending every day with the culinary monotony of instant mashed potato and a tinned tuna.

A few days later the dust and spinifex finally ebbed away by the time we made it to Hawker and we were now surrounded by rolling green hills of grassland grazed upon herds of sheep. No more spinifex, no more cows, no more dust. The outback had finally come to an end with the Oodnadatta.