I popped my head outside of the tent and saw the constellation of Orion slowly disappearing behind the increasingly blue sky. There’s no need to know what time it actually is. I’ve come to know that when the sky is like this I had one more hour before the sun peaks over the horizon and the mercury climbs. The stars out here are something else: with the nearest town hundreds of miles away, every night the sky turns into a light show of hundreds of lights and shooting stars burning into the atmosphere, all in front of the most vivid Milky way I’ve ever seen. With so much to see, and with the help of the StarWalk app, I’d been slowly learning to recognise some of the constellations and when they’d appear. Orion had become my new snooze button.

I think I had spent more time looking at the stars because for so long, for the last six weeks of cycling through the outback, I had been cycling through what you could arguably call nothing. There are no ‘sights’ to speak of, and rarely even a hill to break past the flat horizon. With less to see, my senses elevated and I began to notice more: the slightest change what hardy shrub was growing, the shape of the termite mounds, or the colour of the earth. I’d begin to notice the slightest incline and realise that, although I was probably only ten meters higher than a couple of minutes earlier, the view I got from that tiny increase in elevation meant this was the best vantage point for miles around.  I eventually learnt that the empty outback is beautiful, in its own way. It never displays some extravagant vista that makes you reach for your camera; it has a subtle beauty that changes throughout the day, beginning and ending with the best it has to offer in the golden light of the low sun. There’s certainly a lot of nothing out here, but when you’re noticing more the tiniest of changes can keep you occupied. Nothing, in other words, never gets boring.

But I had now reached the Red Centre and here not only did the road take me West, which gave my my first tailwind in weeks, it also took me past things. Leaving Alice Springs I rolled onto the Red Centre Way and into the West McDonnell Ranges. Now I was pedalling amongst mountains and took the opportunity to turn off the road to explore on foot the gorges and water holes that form the wealth of natural beauty this area boasts. Amongst all these things, I was able to climb on top of the sheer cliff faces of King’s Canyon; I saw the white trunks of gumtrees clinging onto the rocks at Ormiston George; and I dipped my toe in the waters of Ellery Creek Big Hole (that’s mid-winter temperatures had a good attempt of reminding me of the British seaside). The list of big red rocks is extensive and sometimes overwhelming to someone who had been used to seeking out the beauty in not much at all. It’s like shining a torch in the eye of someone who’s just spent a week down a mine shaft. In contrast to my time in Tajikistan, where after a while you become somewhat desensitised to the epicness of the scenery, I couldn’t cope with all that surrounded me. 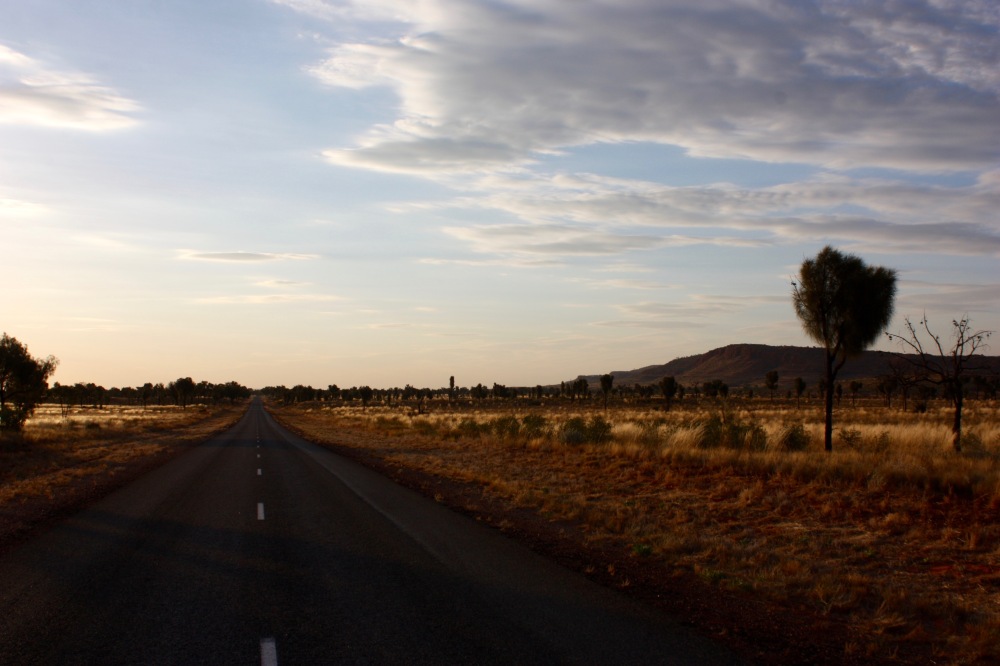 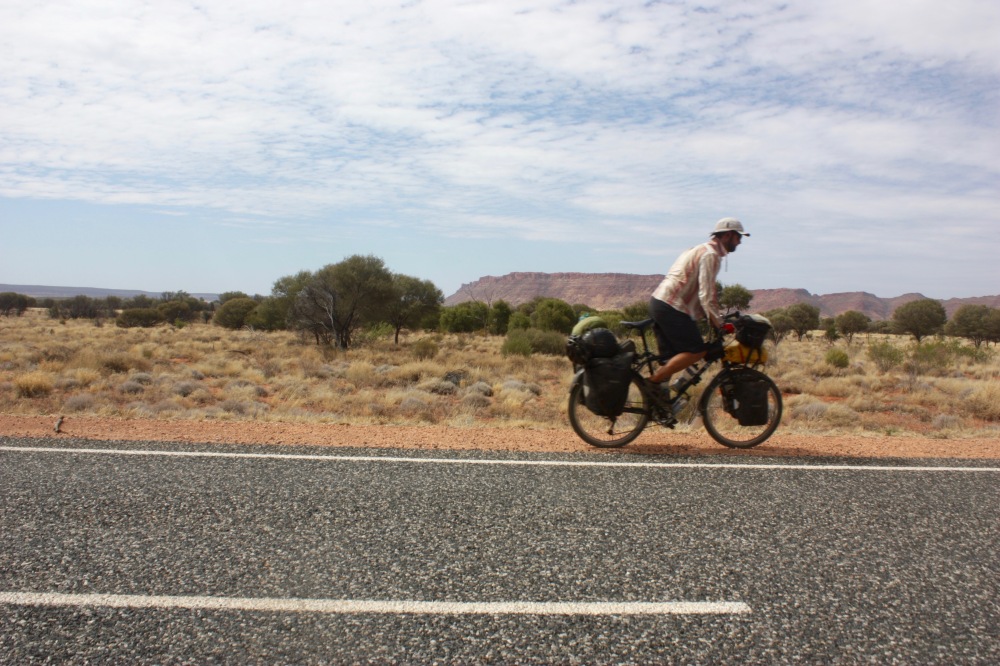 Throughout the Red Centre of Australia I didn’t do much except ride and stare and gawp, and all this gawping at big red rocks finally culminated at Uluru.

Taken under the wing of a lovely French couple with a camper van, we went to the sunrise viewing platform and watched the colours of the rock slowly change behind the selfie sticks and to the noise of idling engines of tour busses; we drove to Kata Tjuta and got lost amongst the narrow valleys and thought ‘yes, this really is the underrated of the two’; and throughout all of this we spent most of our time in the National Park talking about food. Admittedly, we failed to see or feel beyond the surface of these rocks. Impressive as they were to look at; I certainly didn’t feel the magic of the place many go on about, whether that was due to the crowds or the fact that the rational side of my brain subjugated the spiritual side a long time ago.

Unmoved, I left the park to find a spot to camp out of town in order to avoid forking over the $40 they charge for the privilege of camping at the resort. After pedalling down a dirt road and after pushing my bike over a few sand dunes, swearing like a local in the afternoon sun, I came to this: 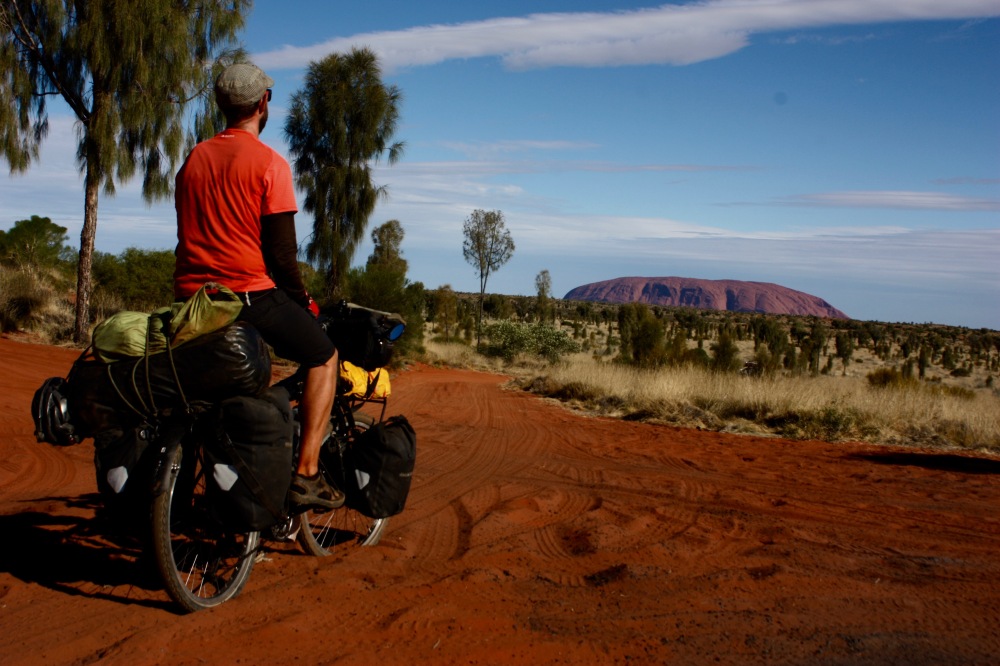 On my last night and morning I sat here alone with this view to myself. The sunset and sunrise were not as vivid here, but sitting here alone and without any noise, except the occasional squawks of passing Galahs, more than compensated for the obscured view. To unzip your tent and wake up to the bright red heart of Australia was something else. This was one of those moments when the camera in your mind’s eye clicks and this image will be what you visualise whenever you think of the Red Centre. After camping here in the solitude I had enjoyed every night for the past six weeks, I understood the magic of this place.

9 thoughts on “The Red Centre”